For more about aborigional dreamtime stories visit the website in the link below.

Dust Echoes
Dreaming stories vary throughout Australia and there are different versions on the same theme. For example the story of how the birds got their colours is different in New South Wales and in Western Australia.

How the Kangaroos got their Tails! 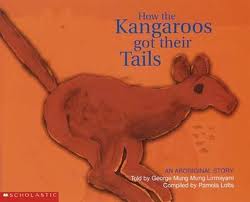